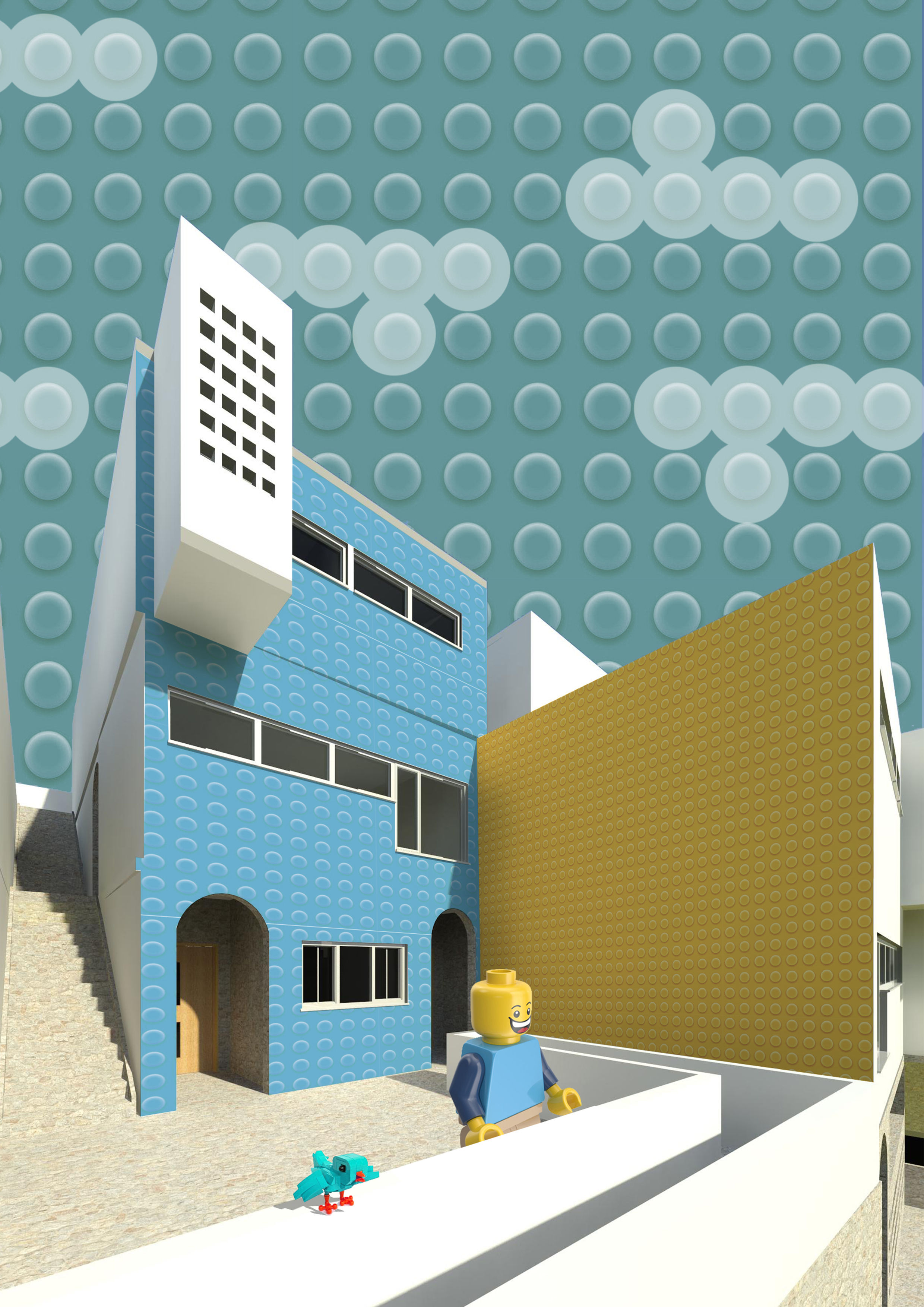 The paved curvy alleys and old brick houses make Jolfa a distinct place; a neighborhood through which you can travel back in time and date by walking in. Several public bathing facilities, two caravanserai, a square and eleven churches have turned the neighborhood into a small town in the heart of Isfahan.The Jolfa neighborhood of Esfahan is located in the southern part of the Zayandehrood River and was established during the reign of Shah Abbas I and has been expanding continually, resulting in its current condition. The Armenians of Esfahan originally lived in Armenia, but in 1013 and 1014 AH, they migrated from Armenia to Isfahan and settled in Jolfa neighborhood. This neighborhood is different from other neighborhoods due to its religious, social and cultural characteristics.This neighborhood features some qualities such as vibrancy, readability, identity and beauty, all of which result in its ability to attract tourists. The square in the neighborhood provides a hangout and gathering space for citizens and tourists. The historic center of Jolfa, with its uniform rhythm and the traditional form and sequence of its exterior walls, brings a sense of being people-friendly to citizens and tourists. The height of the walls and the harmony of the color (red and yellow) as well as the texture of the walls (straw clay plaster and brick) has given identity to the fabric of the region. Because of its security to use all the visible and accessible spaces during day and night as well as its cleanliness and diverse places to sit on, this neighborhood plays an important role in achieving the comfort of citizens and tourists. The cozy intimacy of the cafes and the aroma of coffee coming out from them, as well as the existence of Armenian handicrafts shops, have made the walkway a lovely setting like a home but with public and social uses. In fact, the Jolfa neighborhood is a lovely "home away from home" environment for the citizens and tourists. The Axis of the Vank Church, the Khaqani Street axis, the Shekarchian square axis, the axis of Sangtarashha Street and the green axis of Niasarm Stream, are the main axes of the neighborhood, some of which are already organized and some of which are being organized. 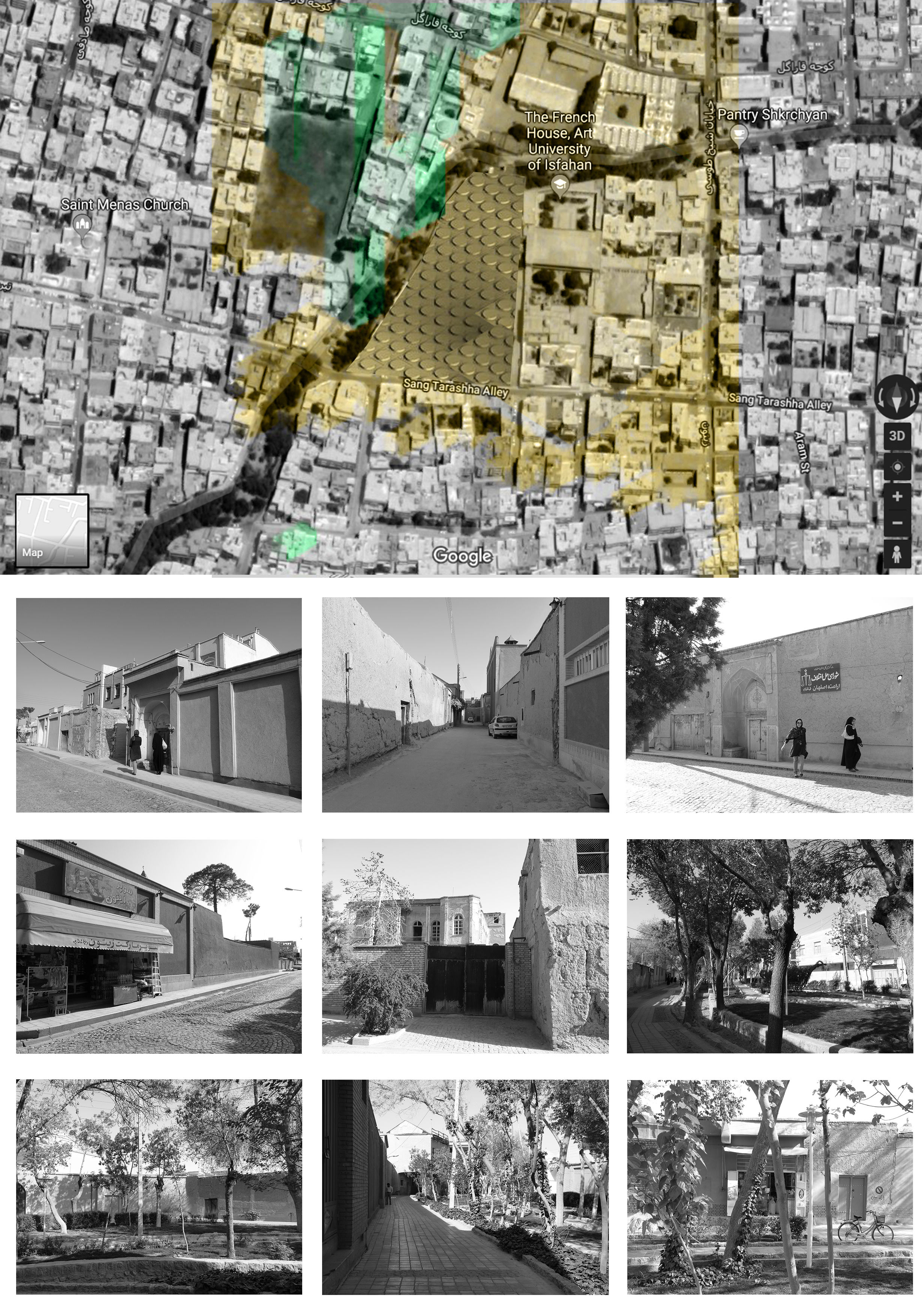 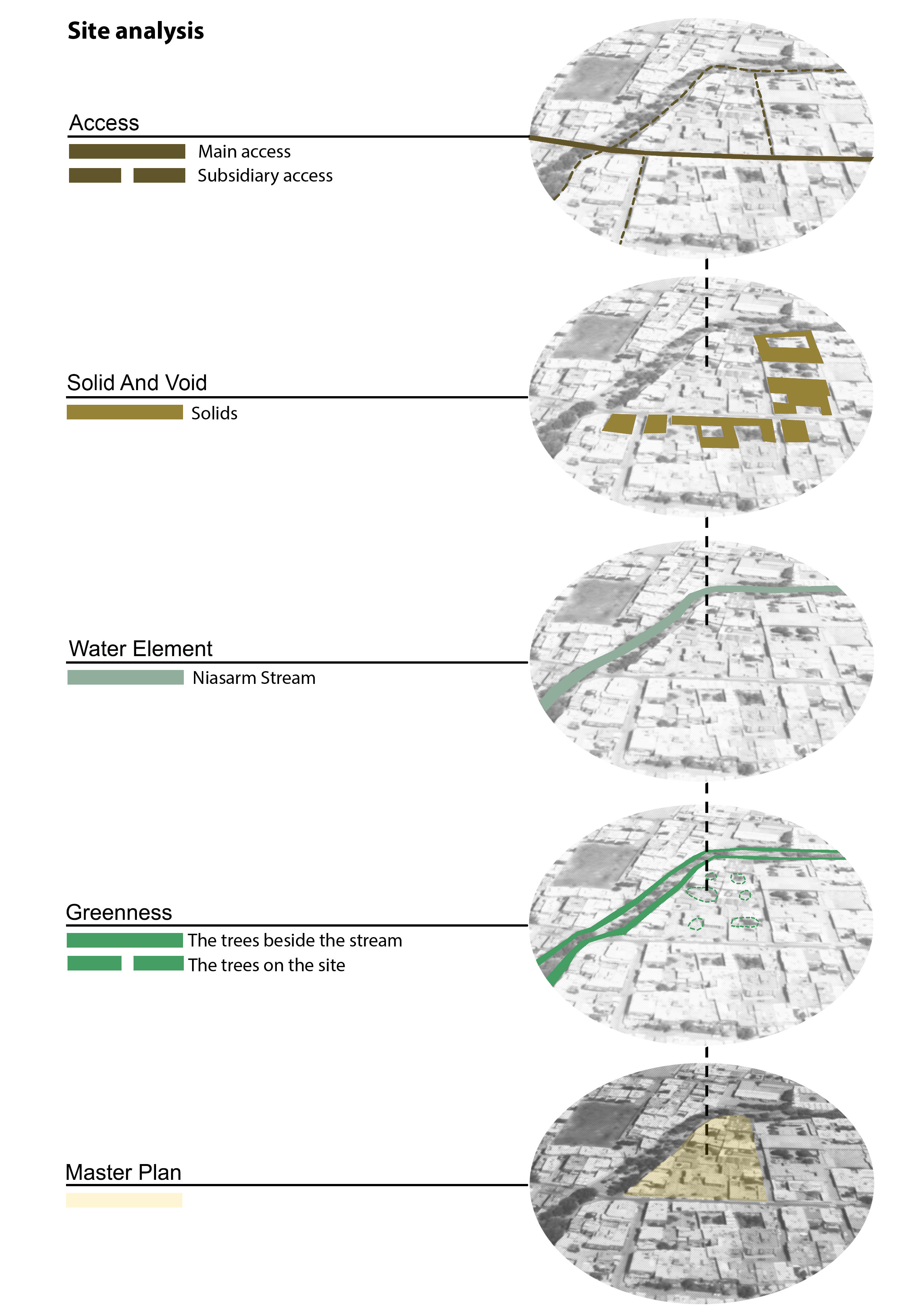 In the design of the complex, three main factors were considered. The first factor is that the western side of the site is adjacent to Niasarm stream. As a result, it would be a distinguishing feature for the project to have an effective communication with the stream and to absorb the sense of the stream into the site. The second factor is that the old trees on the site were aimed to be maintained. The third factor is appropriate lighting, which due to the north-south extension of the site had to be organized and divided in a way that there would be the largest number of south-facing walls. Therefore, at first three main courtyards were assigned according to the location of the trees on the site. In addition to this, the division of rooms was done in a south-east direction so that it could have the largest number of walls facing the south. After the formation of the courtyards, considering the number of units planned for the residential complex, the eastern and western sides of the site were also determined for the construction of the block. In order to extend the stream sensation into the complex, the main access is from the western side and into the central courtyard, and the two north and south courtyards are connected to each other by the central courtyard. 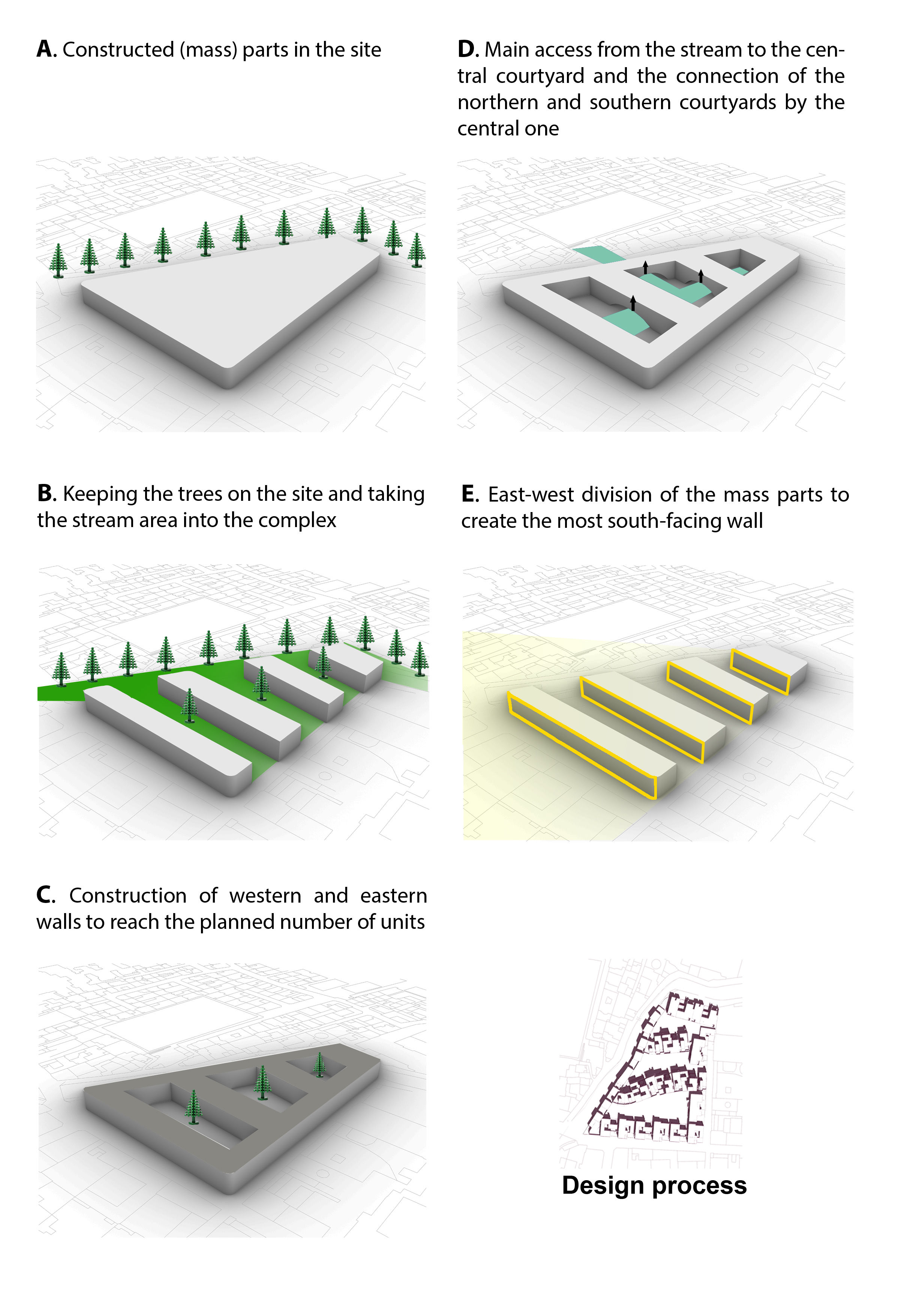 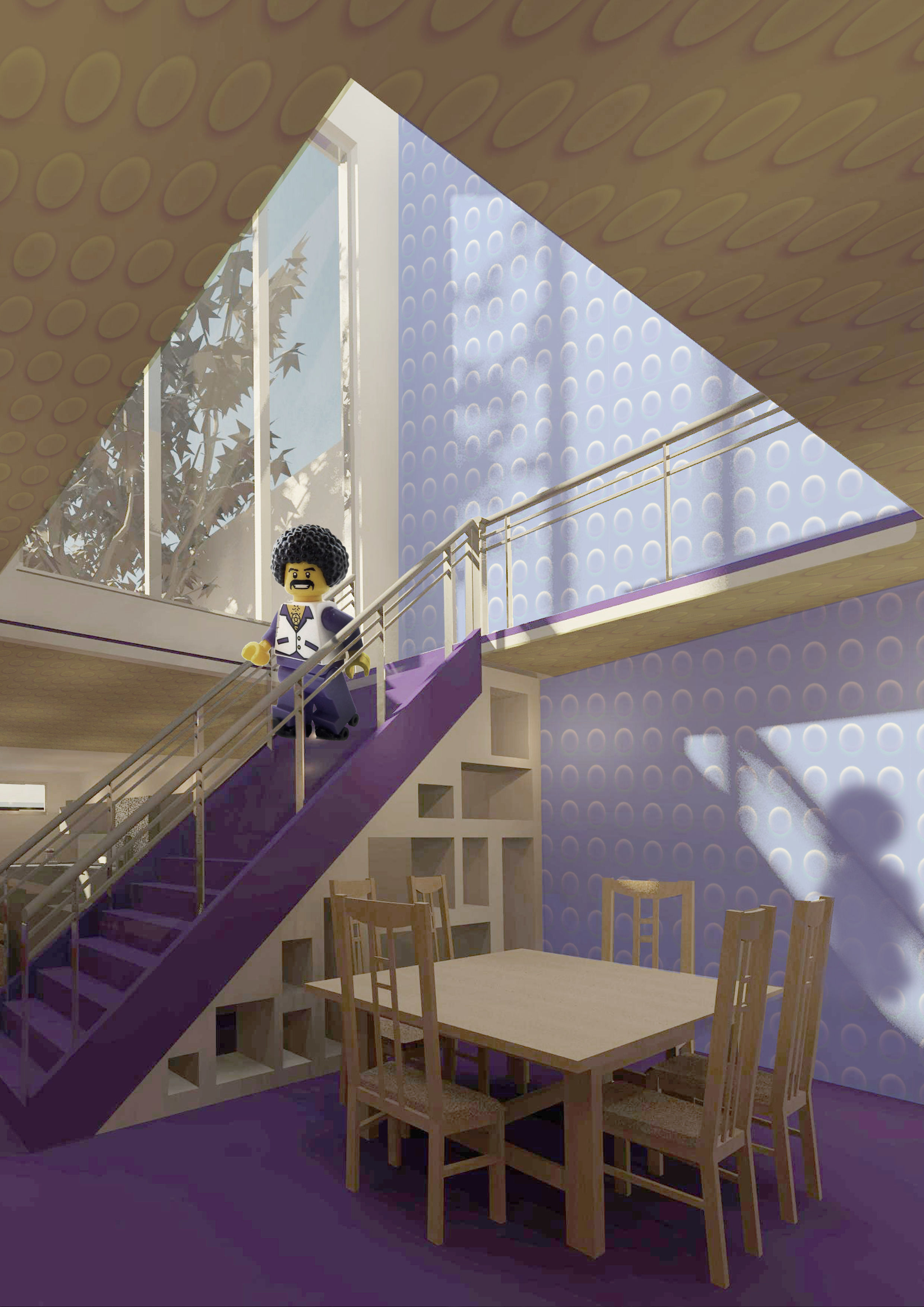 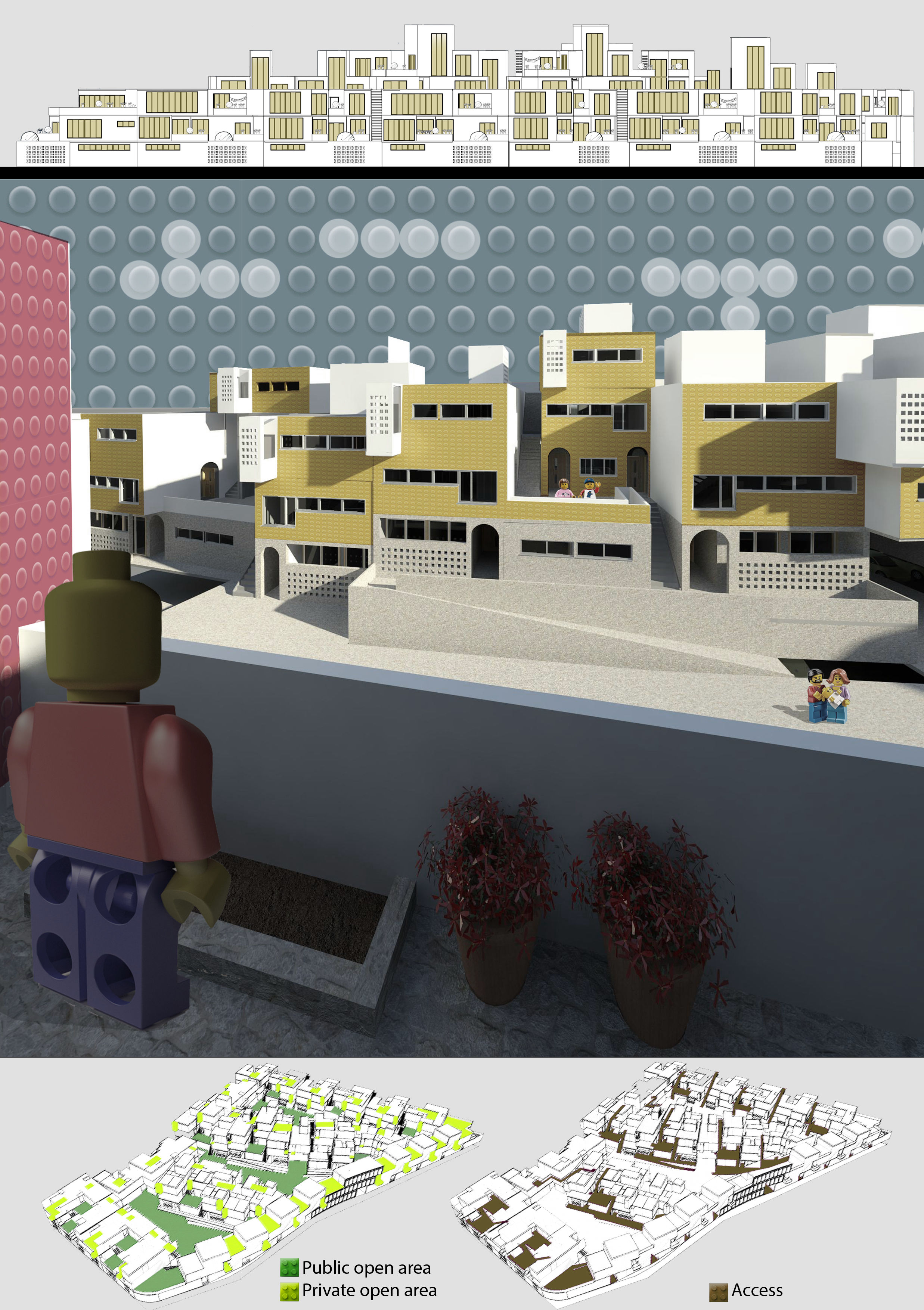 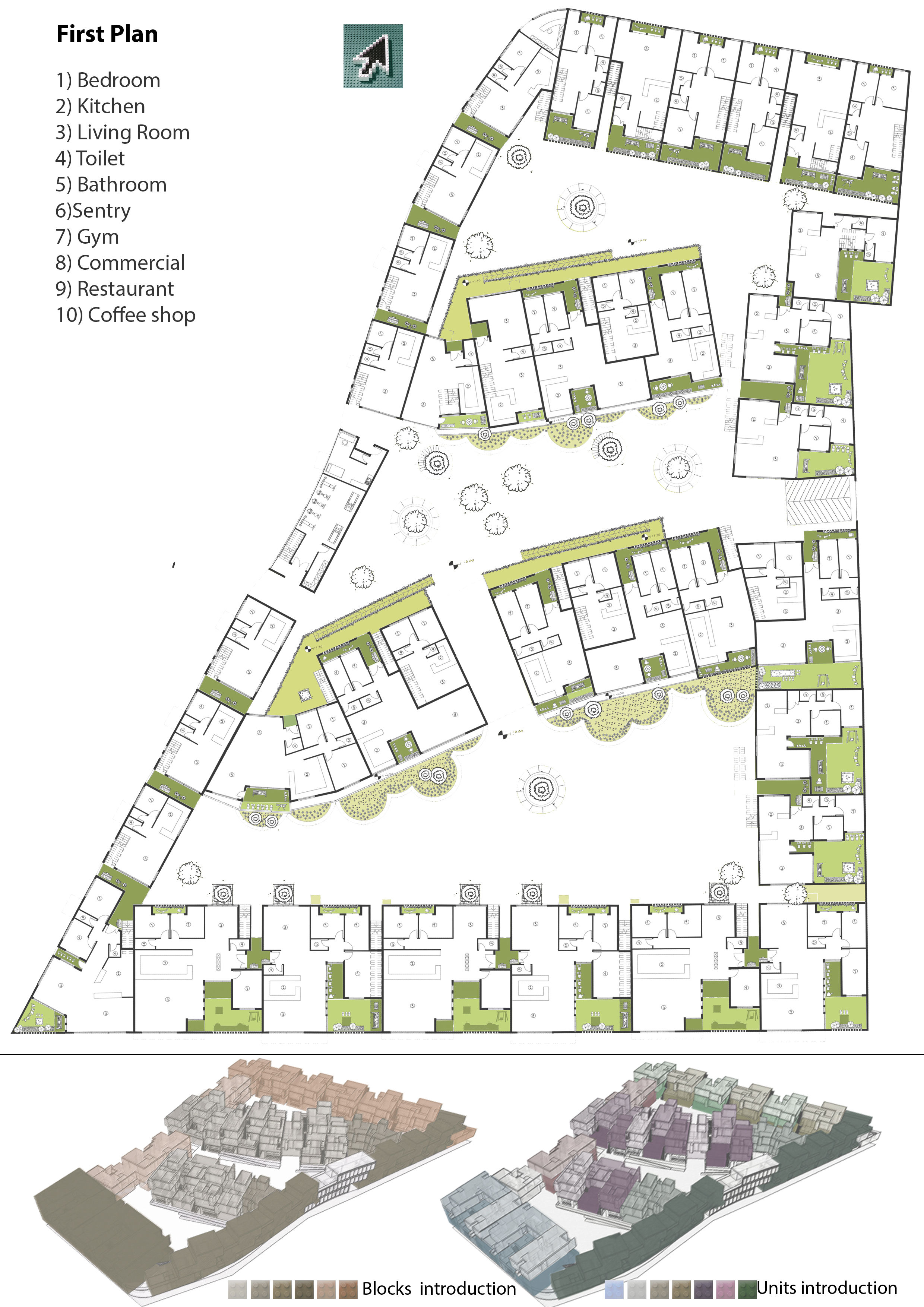 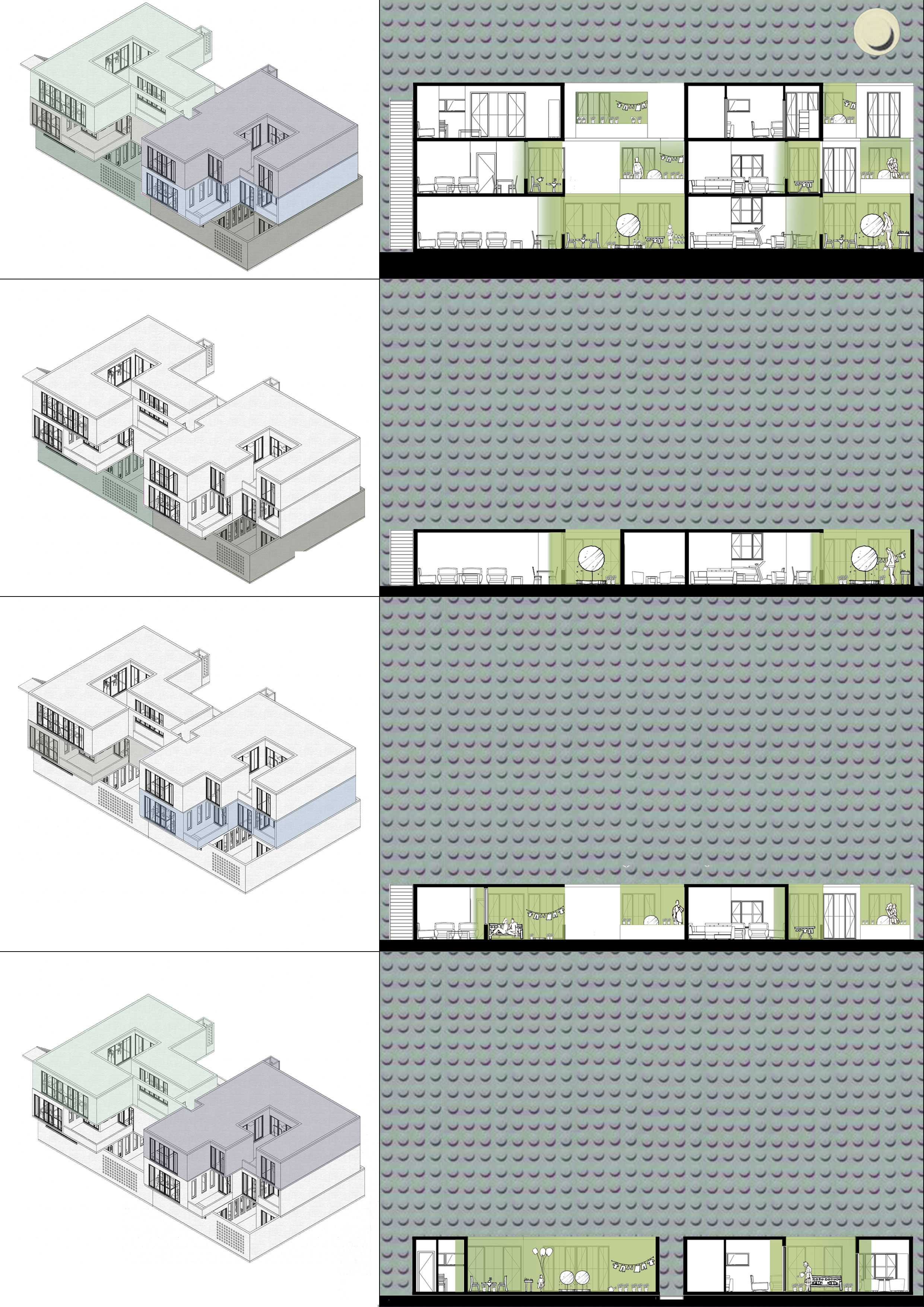 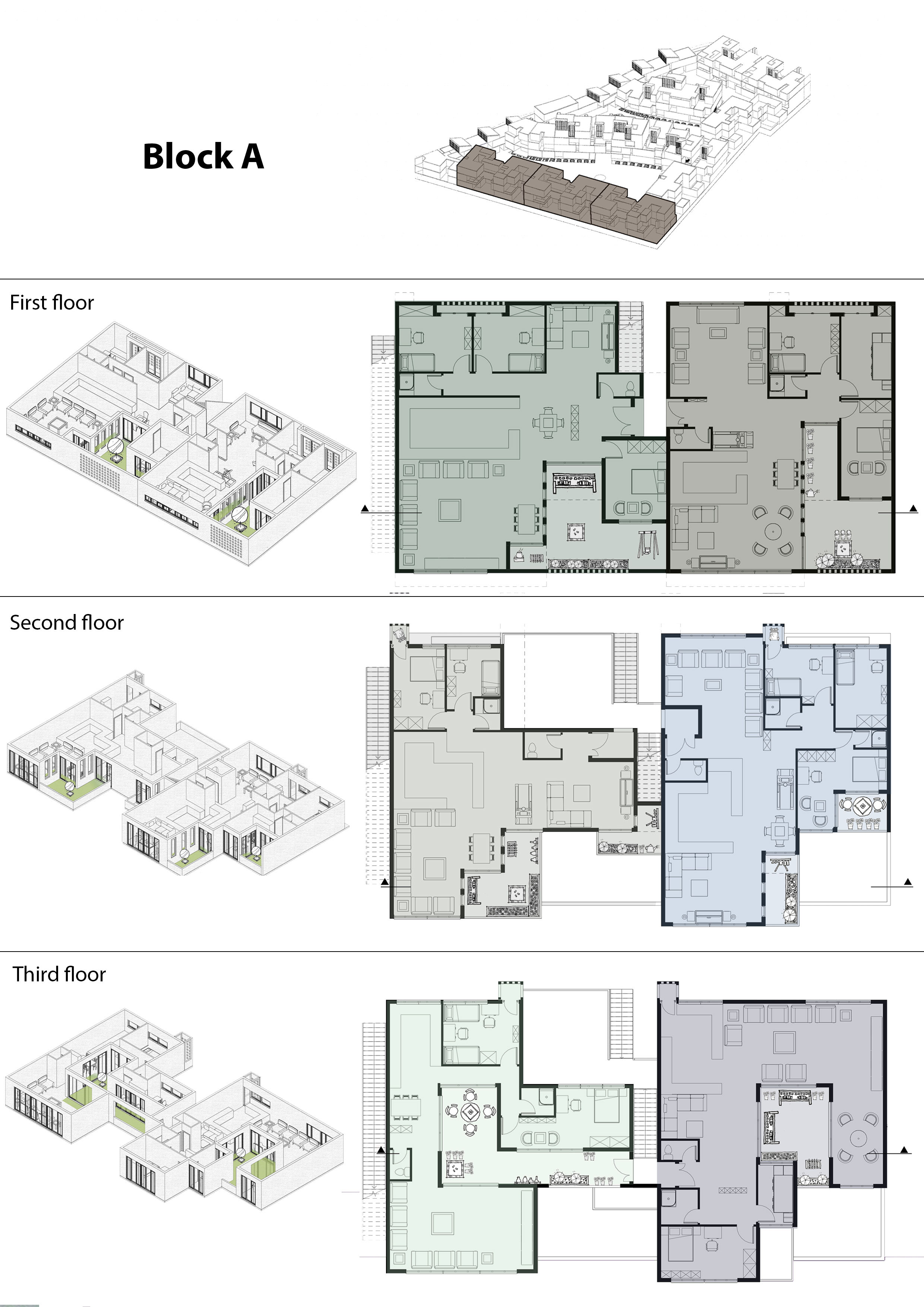 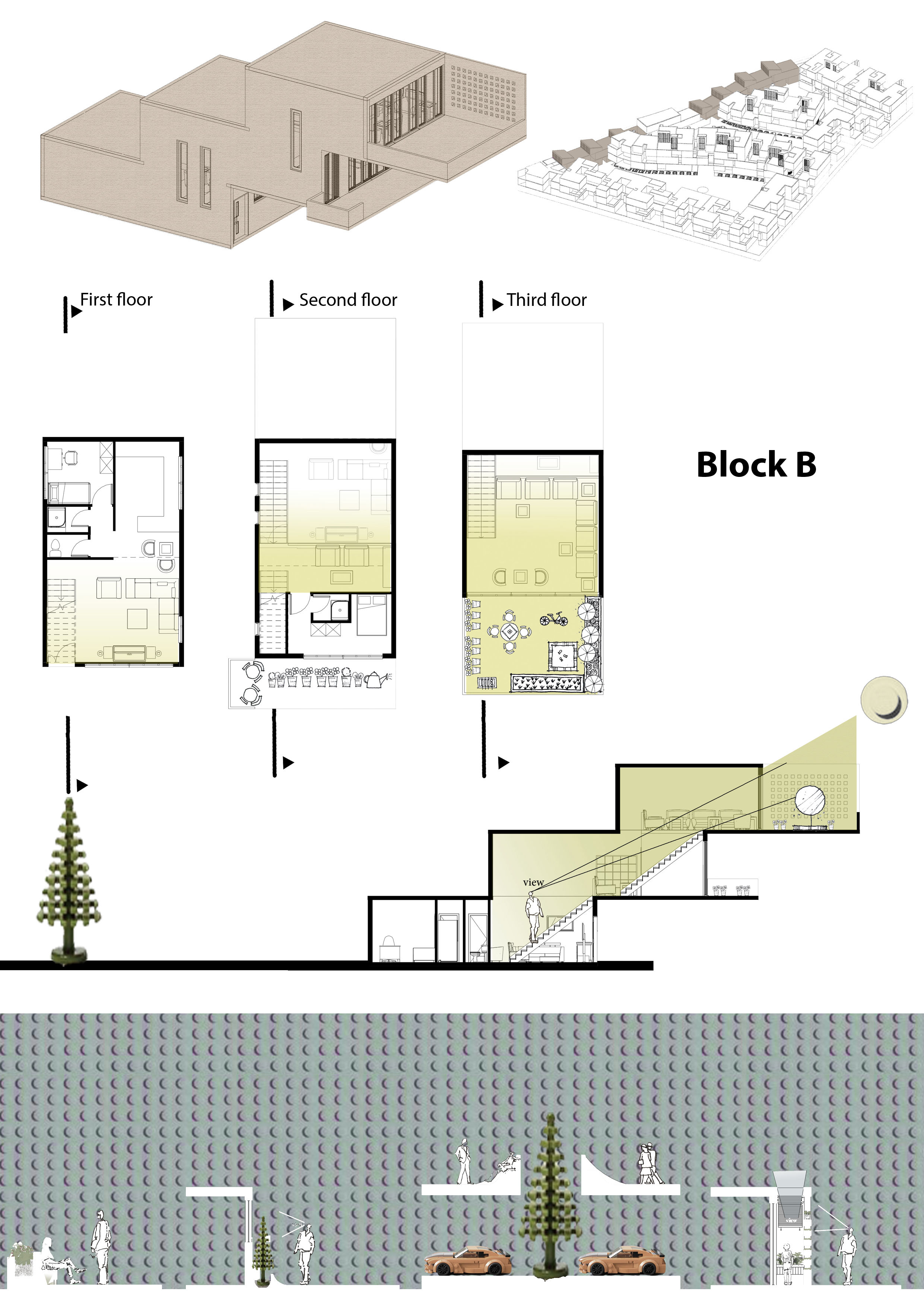 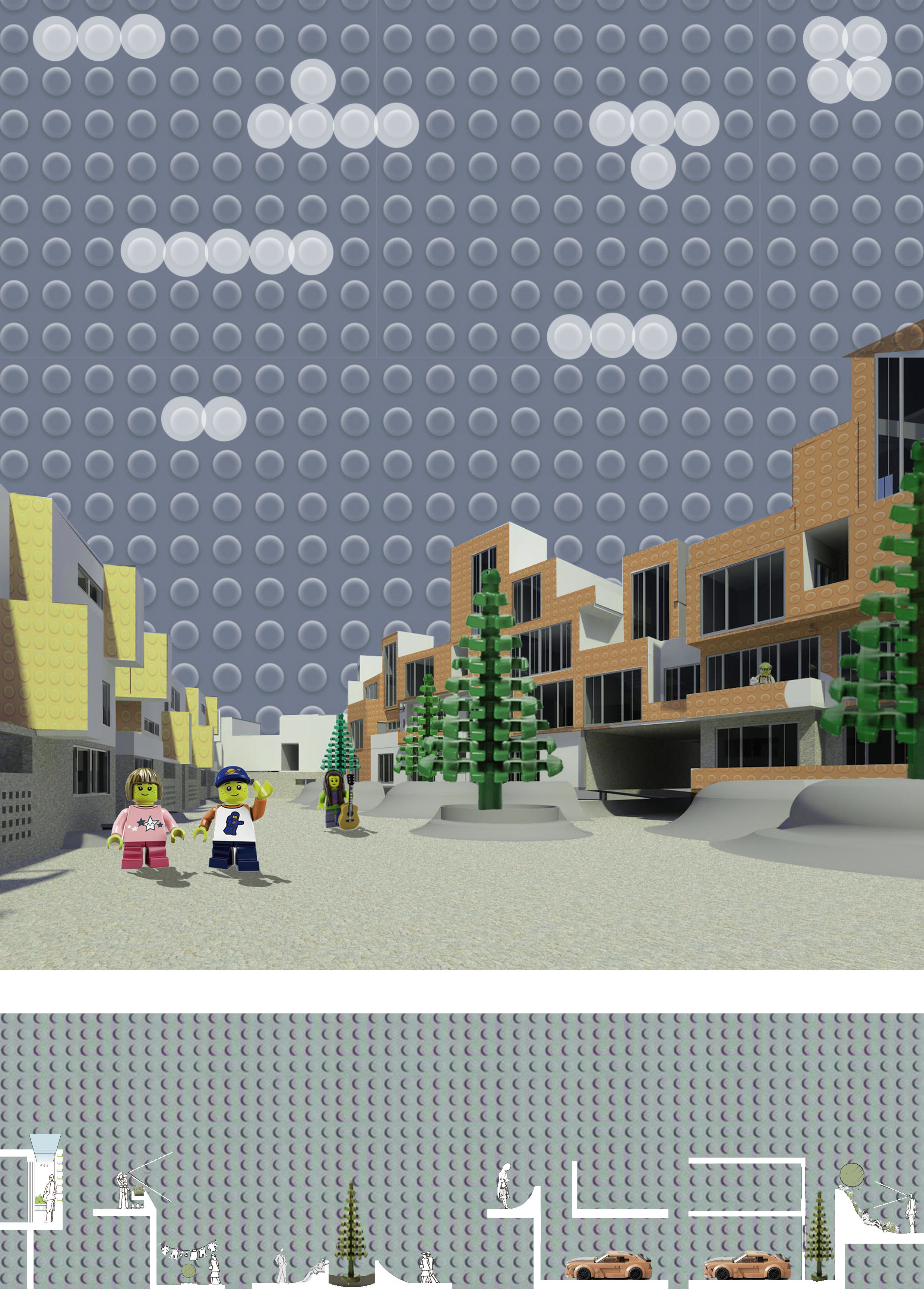