The house belonging to a four-member family consisting of parents as well as their son and daughter is located in Sepahanshahr City in Esfahan. They intended to join two separate apartments, which were on the third floor of a three-story building, and convert it into a single and large house. In addition, they wanted the changes to be made so that if necessary the houses could be turned into two separate units only by placing the wall again. Thus, spaces such as kitchens, toilets and bathrooms were left to exist in both parts and none of them were removed. Each apartment unit, with an area of 135 square meters, was connected to the other in a symmetrical way. At first, structural requirements, facilities and access were examined. The main access to the building is through the staircase and the elevator which are located precisely in the center and between the two units. The curtain walls separating the houses were removed to convert the two units into one. These walls were in the main entrance and between the southern rooms. Generally, the new unit has two living rooms, two kitchens, two bathrooms, two toilets, and four rooms. In addition to the main spaces such as the living room, kitchen ,and so on, the family considered it necessary for the mother to have several other spaces such as a dining room, a guest space, a laundry room, storage and a workroom. The main concept for the design was to divide the whole house into two general private and semi-private spaces. The private space with living room (TV area) and the main kitchen is where the family spends most of its time together in. The western part of the house is a semi-private space for guests and parties. The living room and the guest space are connected through the dining space on the southern side of the house. The kitchen on the guest room side is a little smaller than the main kitchen and is mostly used for catering, and behind it there is a storage space. One of the two toilets was transformed into a laundry room, a space the family had intended to have. The mother of the family was interested in artistic work and needed a separate room for this purpose. The two rooms on the living room side were assigned as the workroom and master bedroom, and the two rooms on the guest space side were allocated to the children. Eventually, a new house with a total area of 270 square meters was designed and renovated for the four-member family. Some of the house's furniture, such as a few lights, a sofa table, dining chairs, a dressing table and a special closet for the daughter of the family were re-designed and rebuilt from the items that were mostly old and not usable. 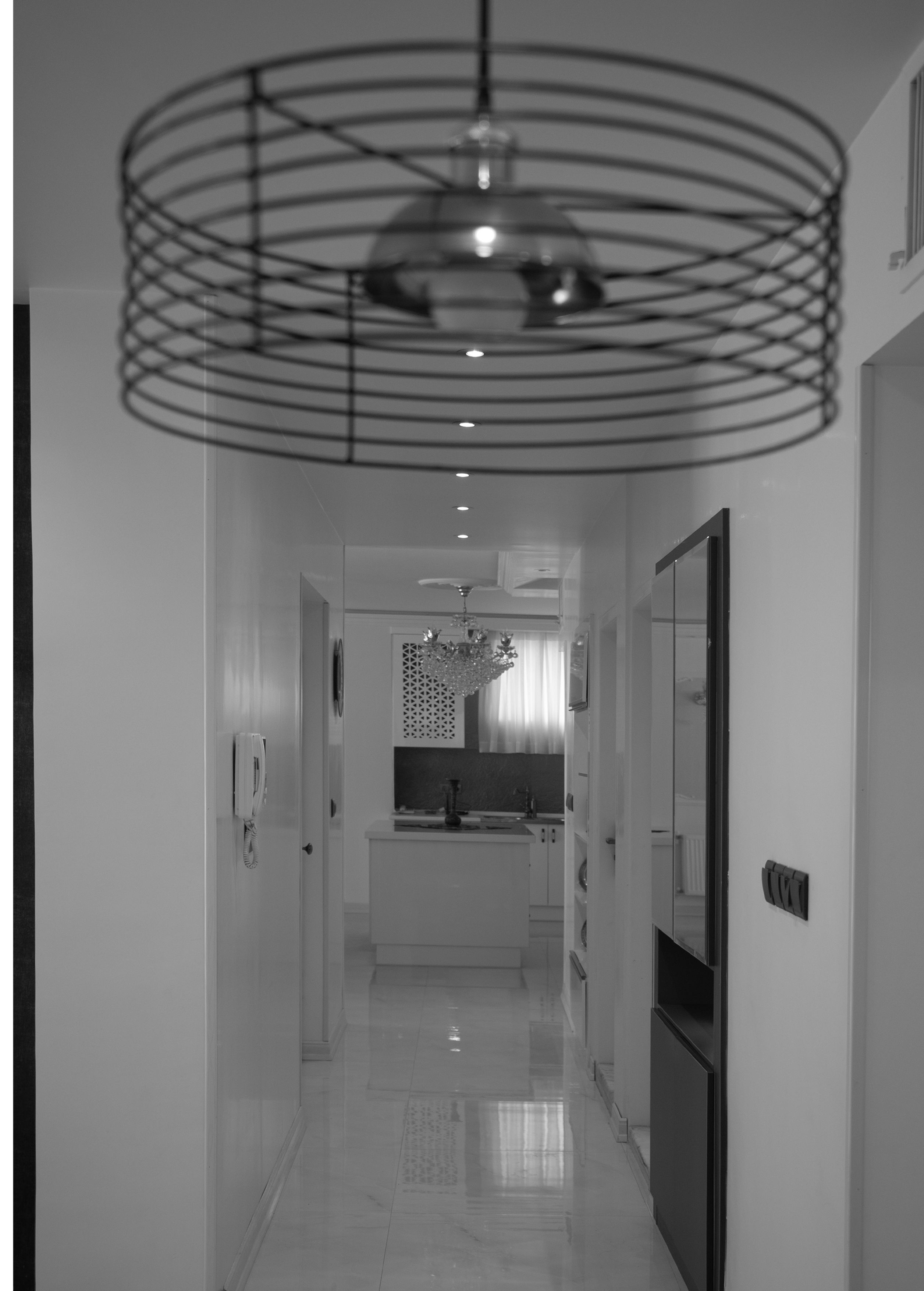 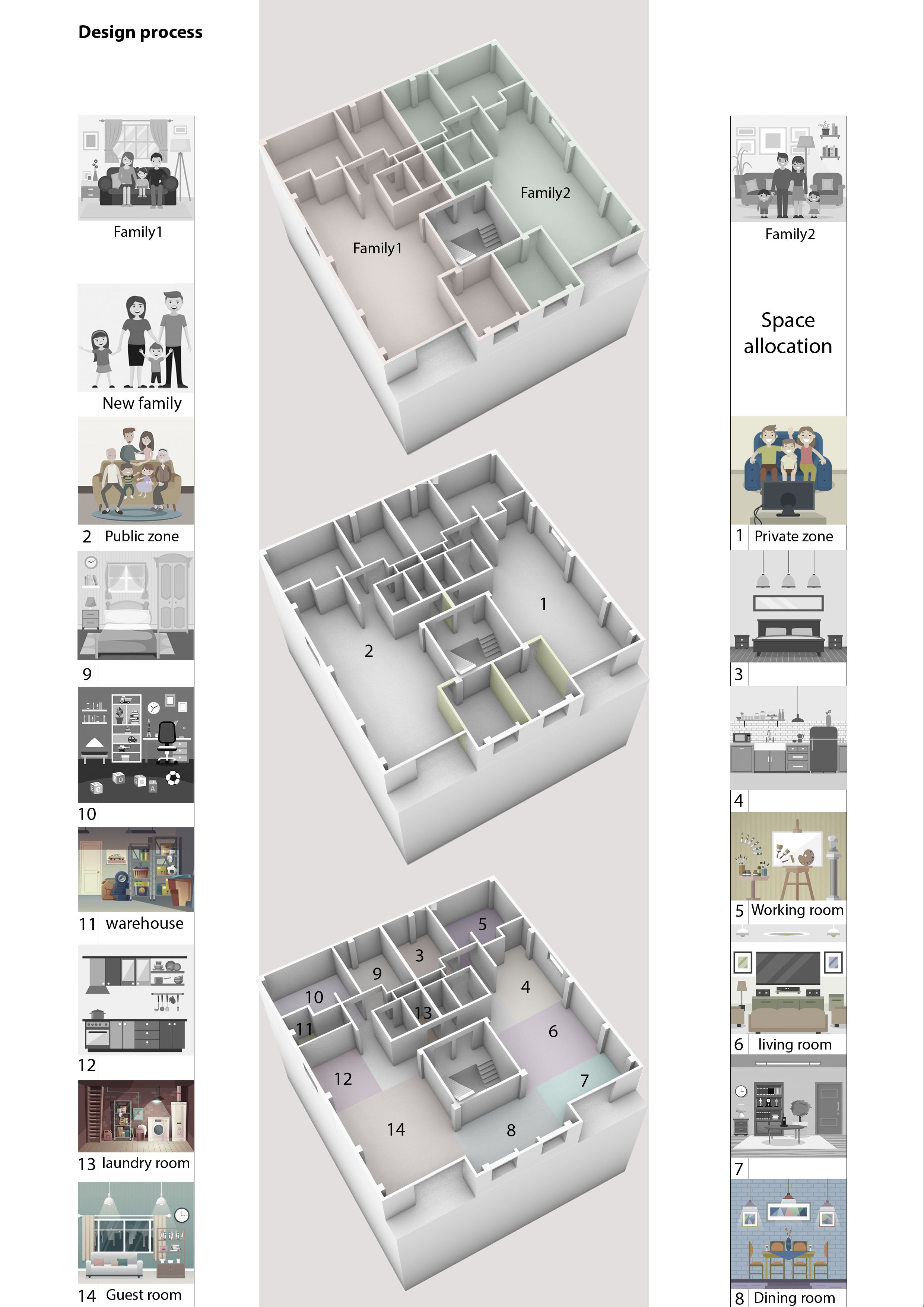 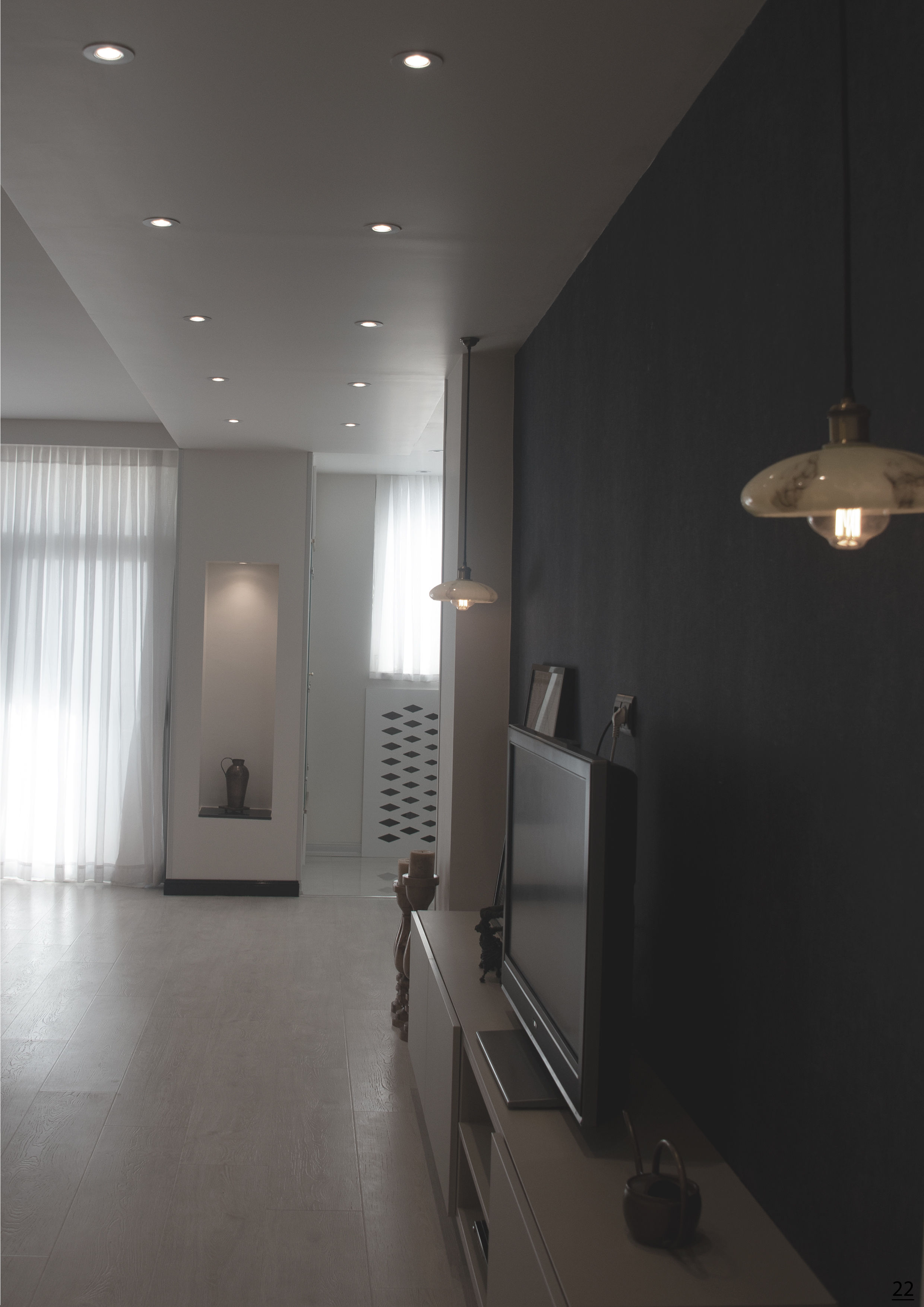 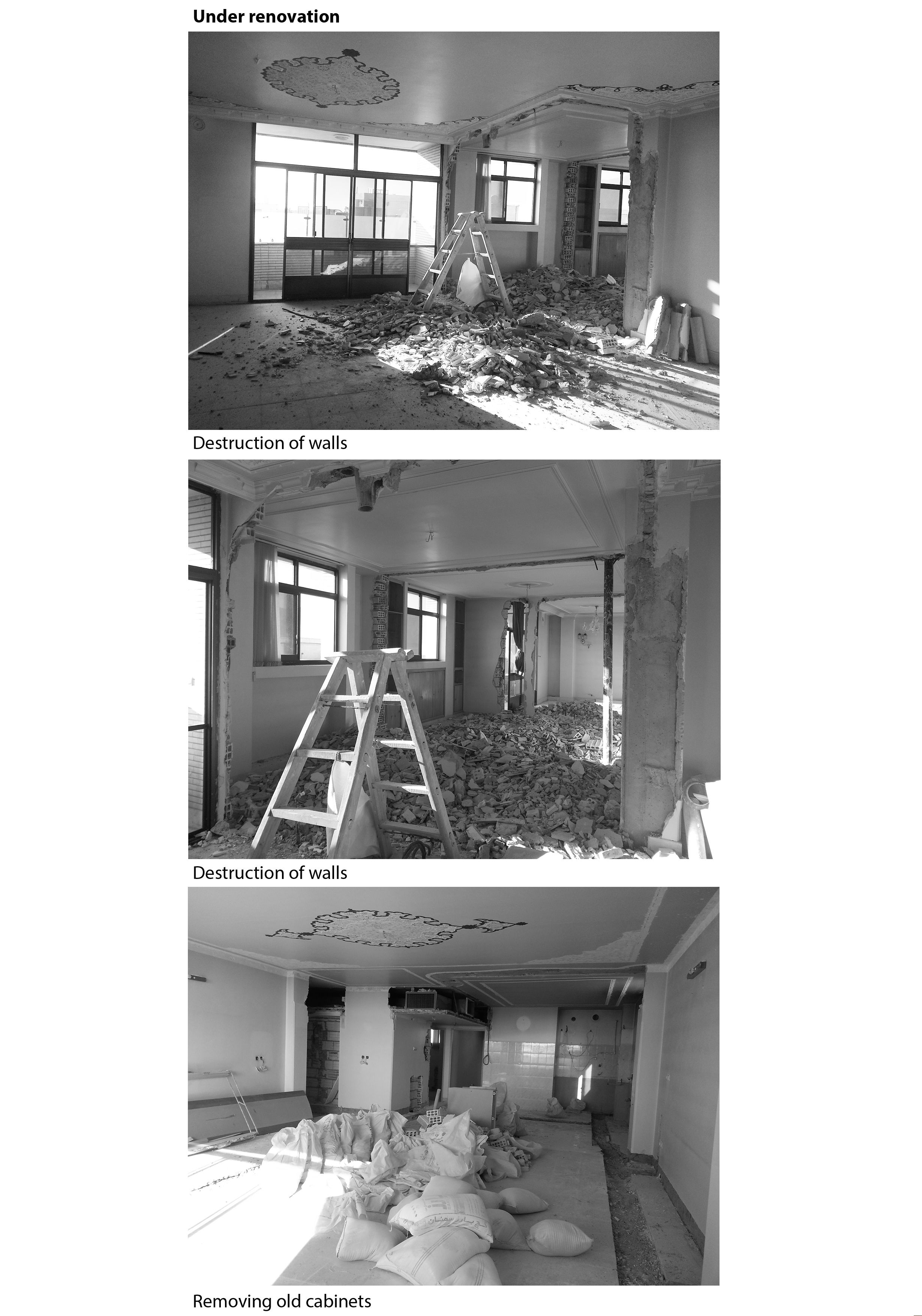 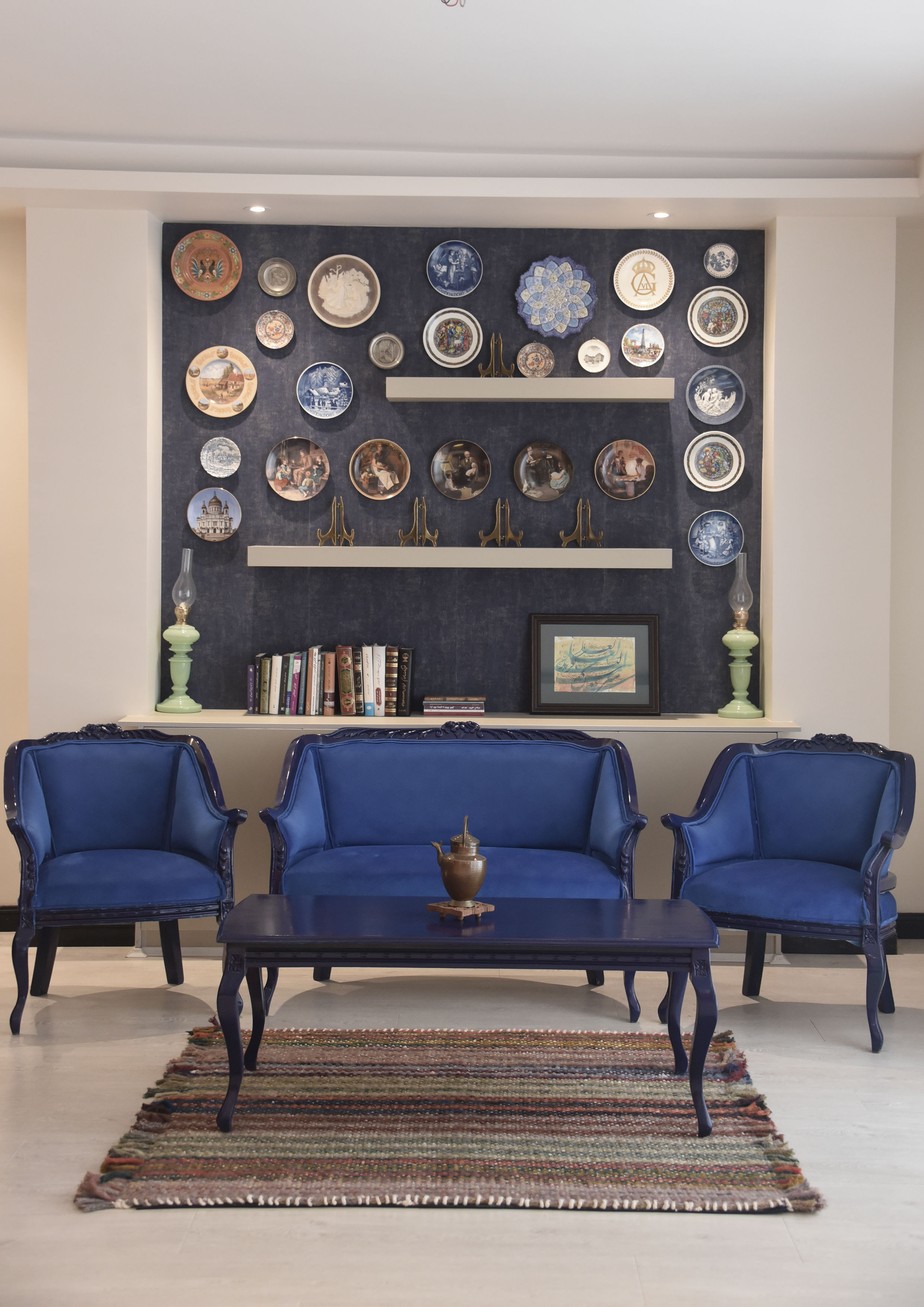 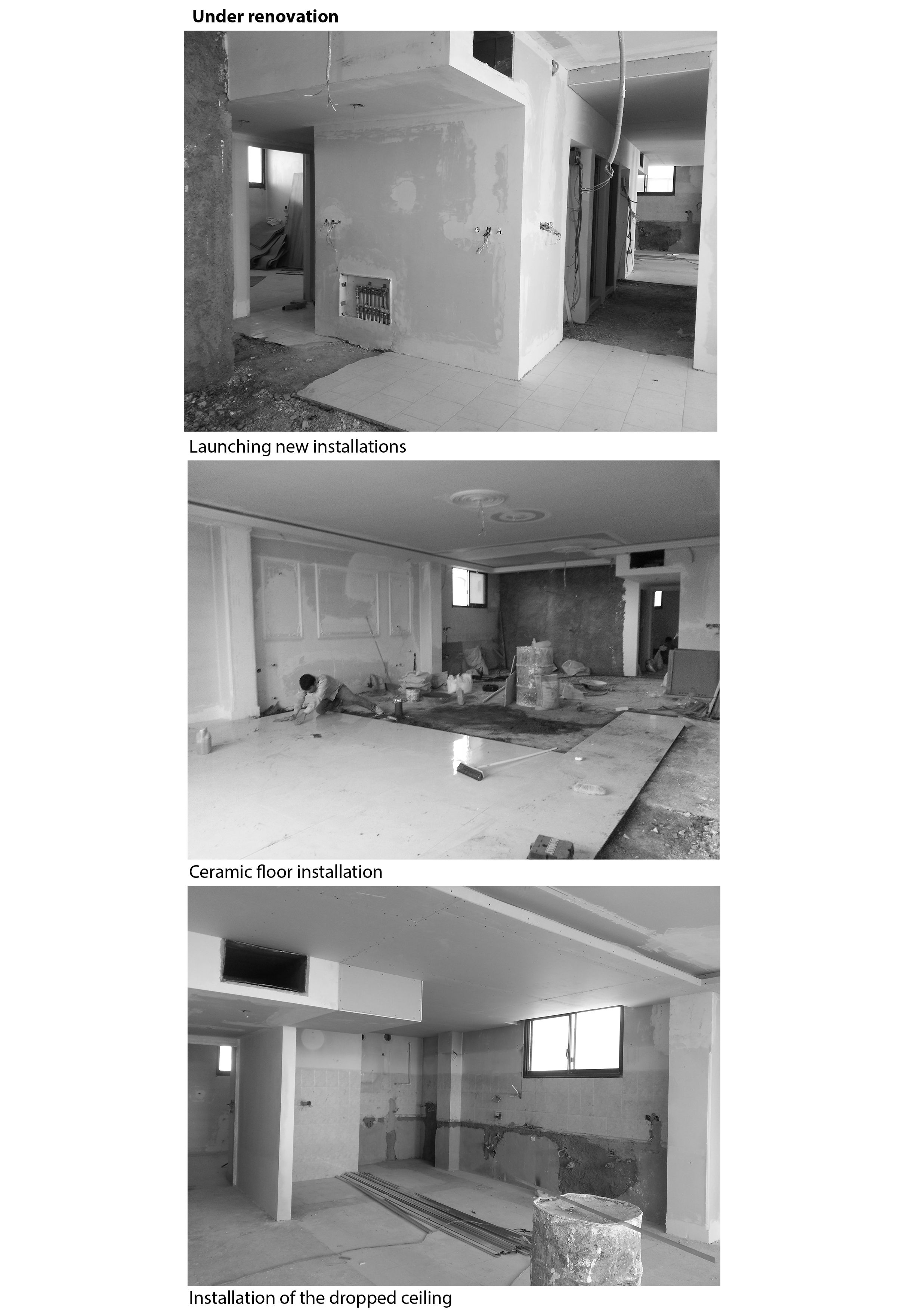 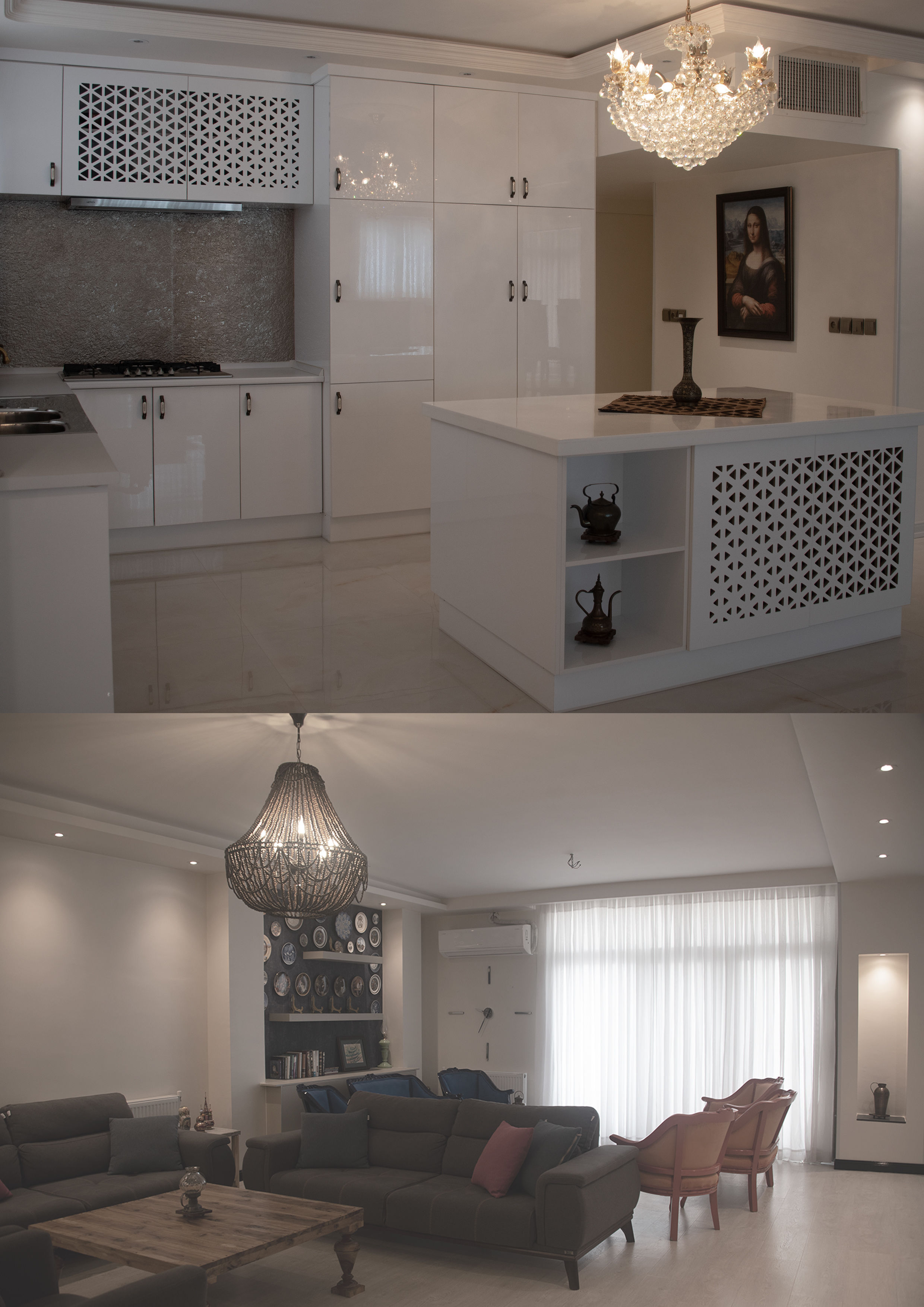 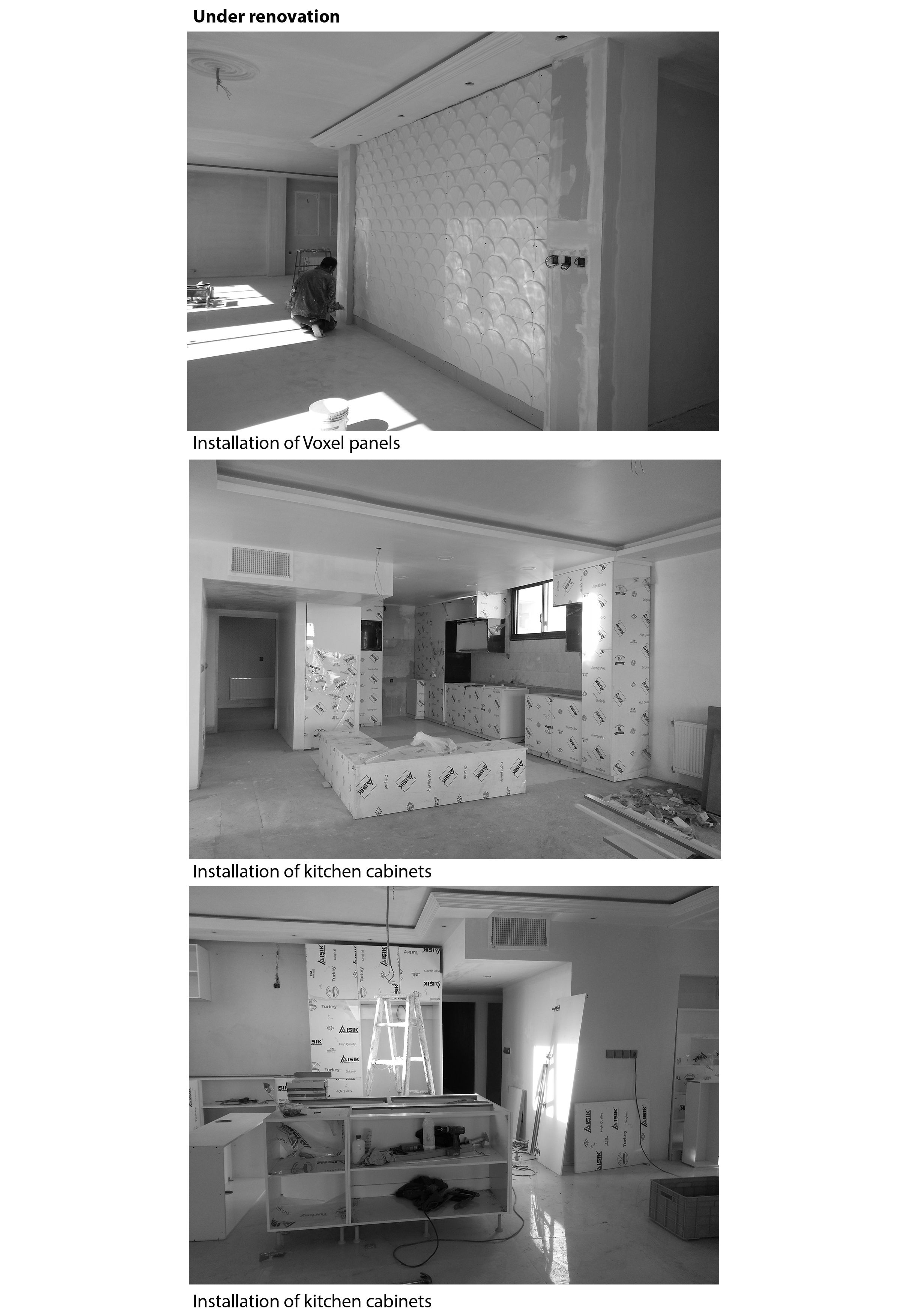 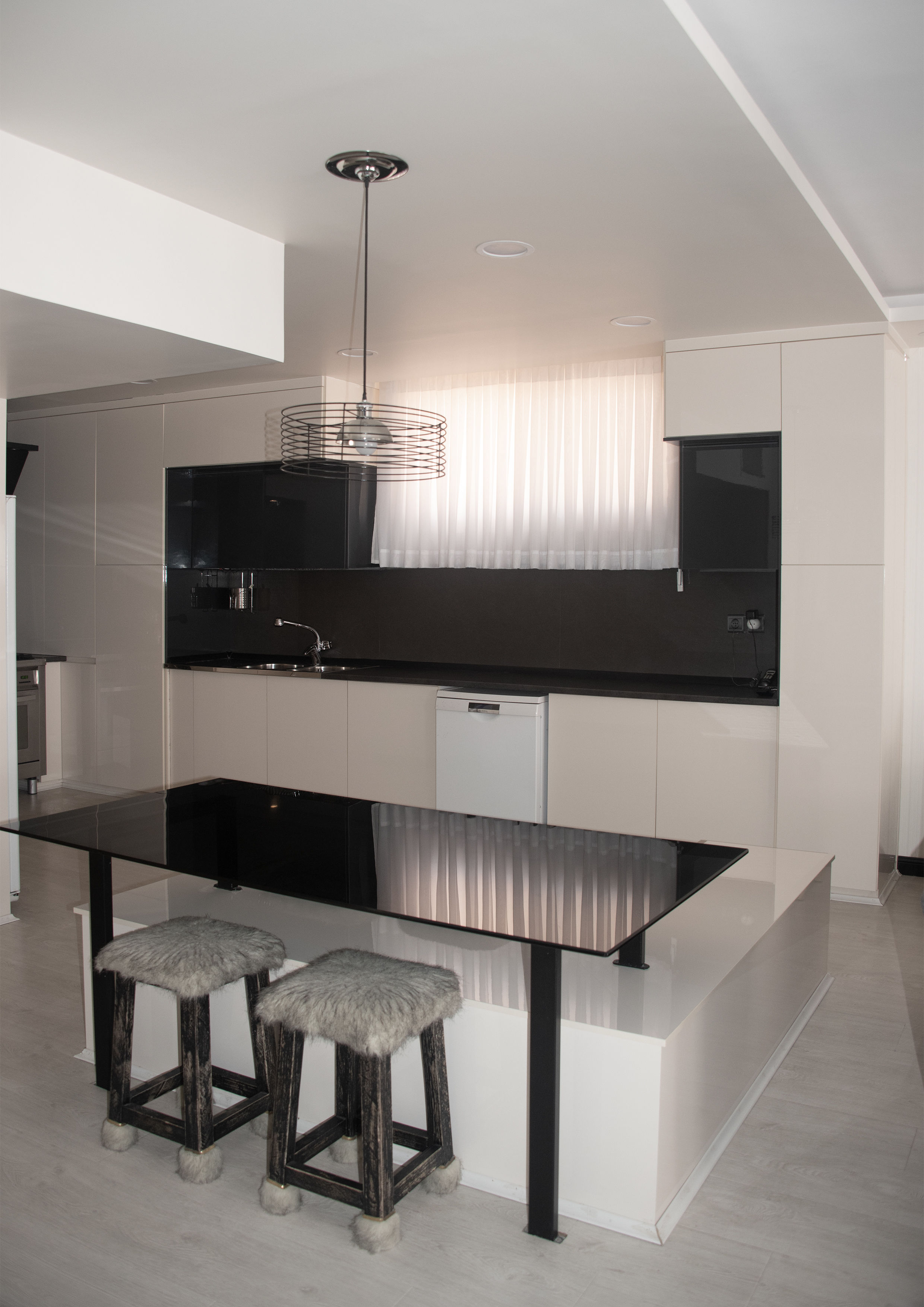 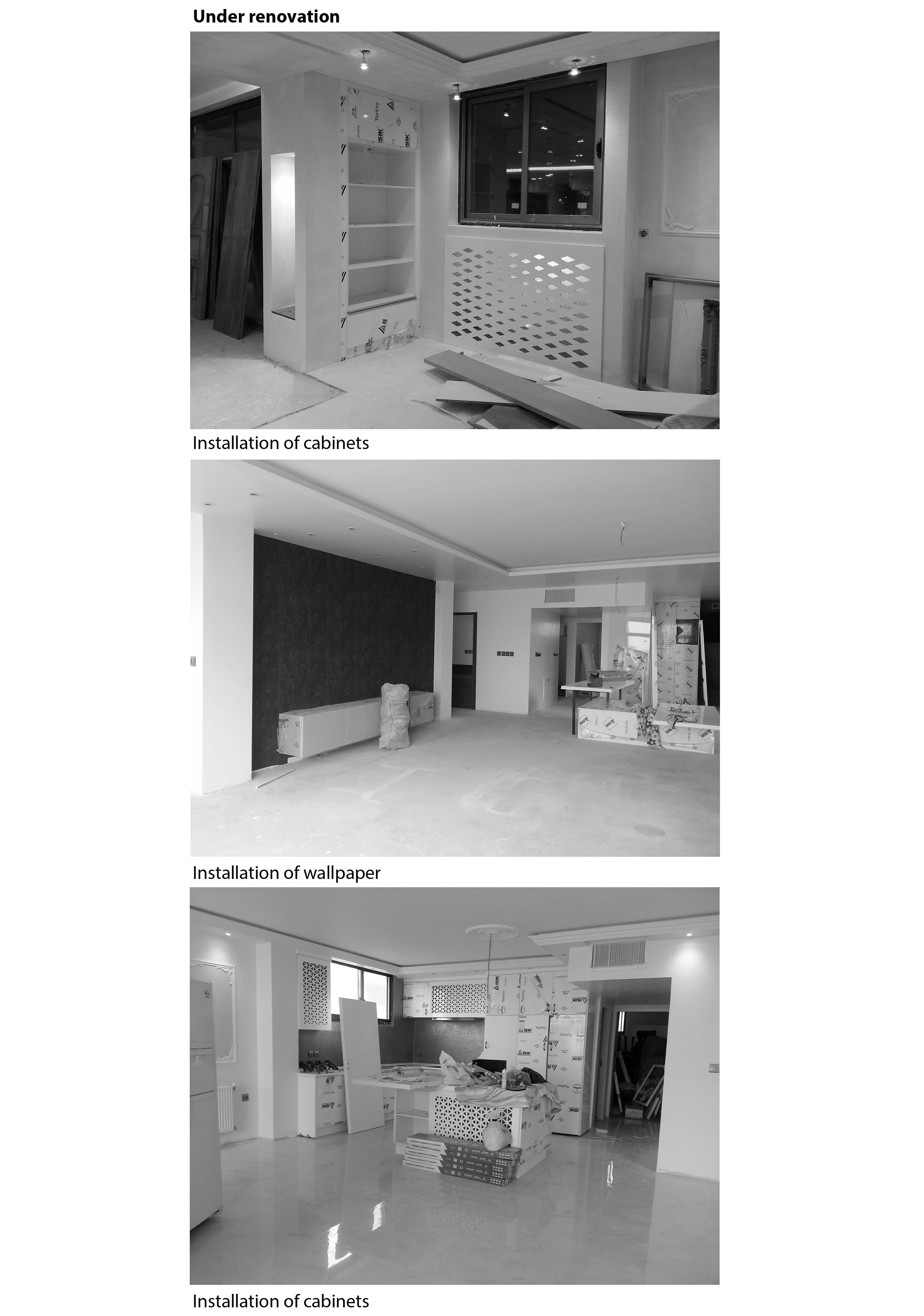 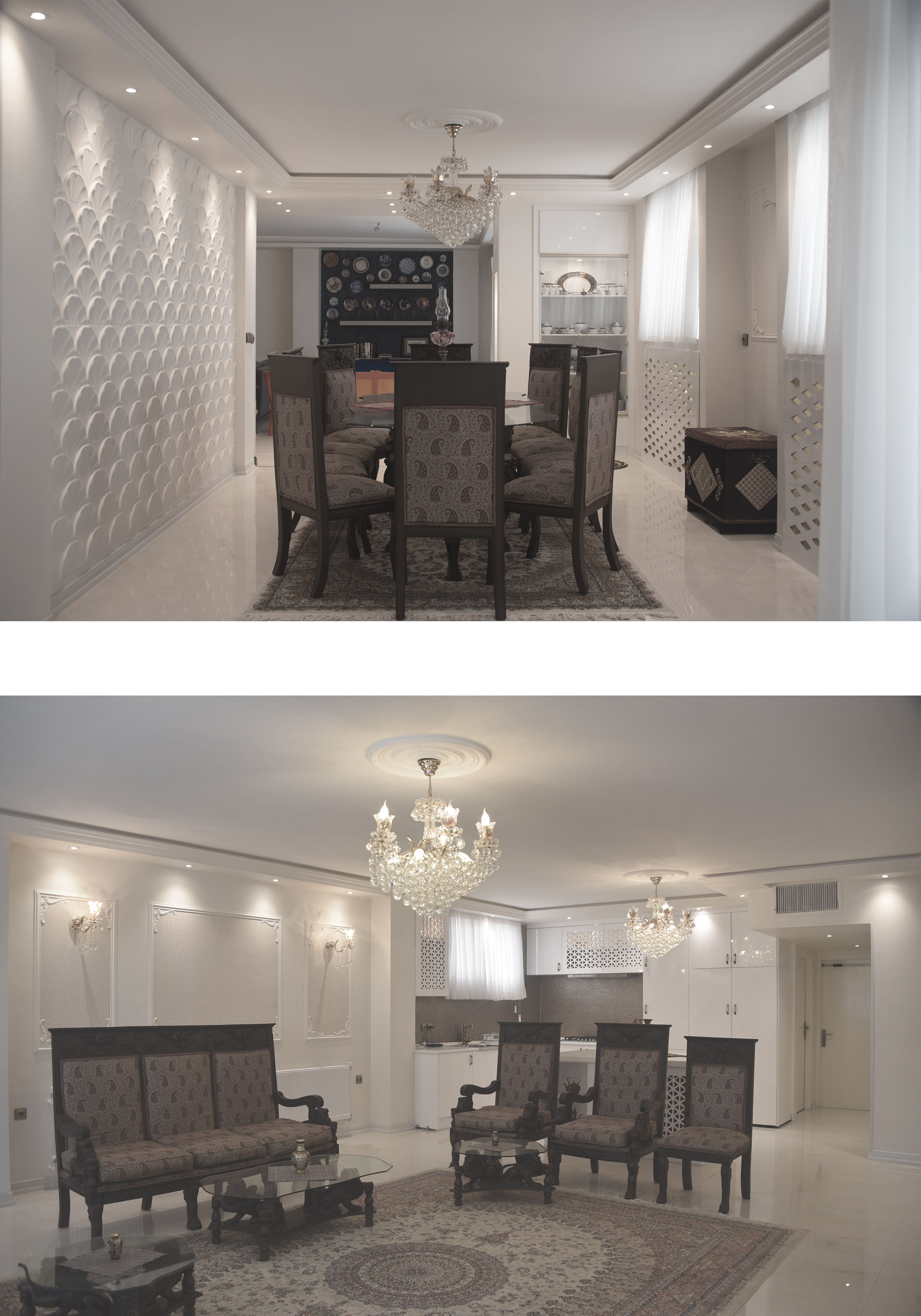